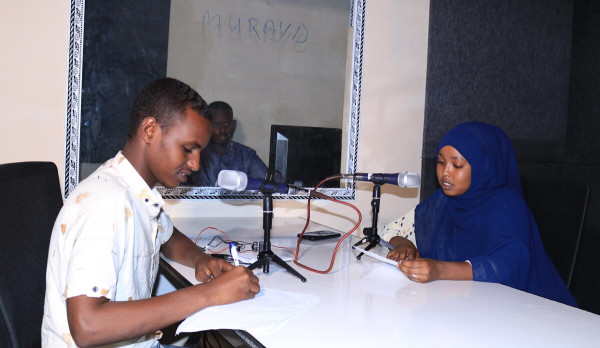 Radio Daar Dheer, Dhusamareb’s first-ever community-based radio station was launched Friday, 15 July 2022, to provide the people in Galmudug State with a platform to engage in discussions on community development.

The radio station is operated by a local Non-Governmental Organization, Dhusamareb Development Organization (DDO) and is, for now, operating for six hours daily.

Supported by the United Nations Support Office in Somalia (UNSOS), the station has 10 members of staff, seven of whom are radio journalists, including two female reporters. It broadcasts on 87.7MHz frequency in Dhusamareb and its environs and is also available live on Facebook https://www.facebook.com/Radiodaardheer.

When the radio station took to the airwaves at 8:30 am on the day of its launch, the first voice to be heard was that of the Galmudug State Minister of Information, Ahmed Shire Falagle.

“There is so much excitement about Radio Daar Dheer,” Minister Falagle said after he presided over the launch. “We hope it will be the ‘voice to the voiceless’ in Galmudug State. On our part, we promise to support the station and urge it to bridge the information gap and to, importantly, focus on social issues affecting the people.”

Since its launch, Radio Daar Dheer has been broadcasting a wide variety of programmes ranging from hard news to health, education, youth and women matters, religion, sports, music and culture as well as children’s entertainment.

"Our focus is to empower communities in Galmudug State by giving them a platform to express their concerns, views, interests and needs and to tell their stories. Many of our programmes are aimed at educating the listener and encouraging dialogue and reconciliation in our community," said the station’s director, Bashir Mohamed Salaad.

Due to Somalia’s oral culture, radio consumption remains very high across the country and radio is the most reliable and easy-to-access medium of communication for the majority of the population.

“I mostly listen to programmes on issues that primarily affect women, but I also enjoy programmes that encourage togetherness, tolerance and forgiveness. I hope the station will increase its programming from the current six hours because it has an important role to play in bringing the people of our community together,” said 34-year-old Galmudug resident and ardent radio listener, Fatuma Farah Abdulle.