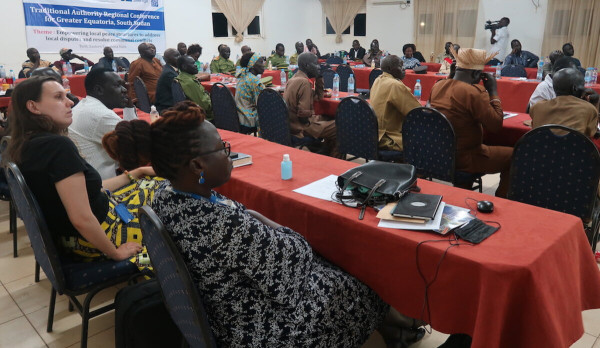 In South Sudan, like in many other countries where state institutions of authority are comparatively young, formal and traditional power structures coexist. But how does one hand know what the other is doing, and how are citizens to know which entity they should hold accountable for what?

According to the 50 participants, drawn from the Greater Equatoria region (the states of Eastern, Central and Western Equatoria), at a recent two-day conference in Torit, part of the answer is closer cooperation between the two parallel systems, with traditional leaders requesting a bigger say in managing and resolving intercommunal conflicts.

“We need to be empowered to work in partnership with the local governments to adequately play our part in sorting out tensions and differences, because we currently lack the capacity to do so on our own,” said Mathew Lorujon, Paramount Chief in Central Equatoria State’s Lainya County.

“For instance, the customary laws in the communities of cattle raiders and those subject to such attacks may differ, which makes it difficult to find common legal ground respected by both parties,” he added.

The forum, organized by the United Nations Mission in South Sudan (UNMISS), the United Nations Development Programme, the government of Sweden and the ministries of local government in the Equatorian states, aimed at working out how the necessary collaboration between formal and traditional hierarchies can be achieved. Traditional chiefs, community leaders and local politicians were invited to ponder this key issue.

“We wanted to identify their different roles and responsibilities, and to recognize and appreciate the presence and vital work of traditional leaders when it comes to peacebuilding at the local level,” said Tahir Cevik, a Civil Affairs Officer serving with UNMISS.

Lively discussions on a variety of related topics ran deep into the night, but participants reached a generic agreement in principle: national and state governments should accept that traditional chiefs are an integral part of the administration of the country.

“Our voices as chiefs must be heard and respected in discussions on security, land ownership and the peaceful coexistence of communities, because we are the effective leaders at the grassroots level and hence part of governance,” concluded Paramount Chief Mboribamu Renzi Tomburo from Western Equatoria’s Tombura County.

Participants also agreed that local chiefs can learn best practices from each other by means of exchange visits between them.

This regional conference in Torit is set to be followed by a similar, national one.