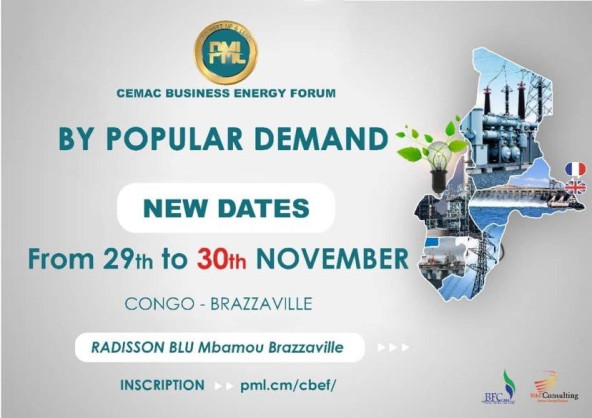 The Oil and Natural Gas Industry is proud to endorse the upcoming Central African Economic and Monetary Community (CEMAC) Business Energy Forum, taking place on 29 – 30 November 2021 in Congo – Brazzaville organized by M &L Consulting. As a dedicated meeting platform for the CEMAC sub-region, and with a primary objective to host interactive discussions between regional stakeholders, the conference will be critical for the growth and improvement of the regional energy sector.

The CEMAC region – comprising six states including Gabon, Cameroon, the Central African Republic, Chad, the Republic of the Congo, and Equatorial Guinea – represents one of the richest regions in Africa regarding natural resources. Home of some of Africa’s biggest project developments, the region is making an accelerated effort to develop its resources in a sustainable and mutually beneficial manner and the Forum will serve to enhance this trend.

The CEMAC region is leading African energy progress, particularly in the field of Liquefied Natural Gas (LNG). The region’s LNG potential is immense, with natural gas reserves estimated at 10 trillion cubic feet (tcf) in the Congo; 1.5 tcf in Equatorial Guinea; and 4.7 tcf in Cameroon. Much of the potential in regional states remains largely untapped, particularly in countries such as Cameroon. Already, we have seen countries pursuing accelerated LNG developments with Equatorial Guinea’s Gas Mega Hub project – designed to harness unexploited offshore domestic gas resources and those in the region -; Africa’s first Floating LNG project in Cameroon; and the Congo’s Gas Master Plan which aims to maximize resources through LNG developments. Deals like Yoyo Yolanda need to go ahead with Chevron, Etinde projects in Cameroon need to be fast tracked with New Age and Lukoil consortium. A lot of Energy Companies have chosen CEMAC to invest in ExxonMobil, EGLNG, Marathon Oil, Chevron, Total, Eni, BW Offshore, Atlas Petroleum, Kosmos Energy, Noble Energy, Glencore, Perenco, Gunvor, and Trident Energy, among others.

Additionally, the CEMAC region remains committed to driving oil developments, recognizing the value of the resource in driving socio-economic growth and alleviating energy poverty. Across the region, three states are members of the Organization of Petroleum Exporting Countries, with the Congo serving as the seat of the African Petroleum Producers Organization. As the region pursues the expansion of the oil sector, capital flows will need to be increased and regional cooperation enhanced. Thus, the role of the CEMAC Business Energy Forum is brought to light.

“With the right investment and support, the CEMAC region can position itself as a globally competitive oil and gas market. Significant reserves await exploitation, and by strengthening the business environment across the region, the potential of the region can be realized. In addition to natural resource potential, the region boasts some of Africa’s top energy companies. National Oil Companies (NOC) such as the SNPC, SNH, SHT, GEPetrol, and the Gabon Oil Company – with the continent’s only female head - have emerged as key drivers of the regions energy growth. By promoting the potential of the region, the role of domestic companies, and the value of CEMAC’s resources for both Africa and the world, the Forum will be instrumental in driving growth,” stated Leoncio Amada Nze, CEMAC Region President, AEC.

Meanwhile, the significance of the conference lies with the potential for cross-border project collaboration owing to the significant resources sitting on the maritime borders between nations. By strengthening regional cooperation and improving the operating environment for domestic and global companies, the CEMAC region can drive energy sector growth. Regional leaders such as H.E. Gabriel Mbaga Obiang Lima, Minister of Mines and Hydrocarbons, Equatorial Guinea, continues to push hard for regional collaboration, particularly regarding trade and cross-border initiatives. Conferences such as this will only serve to enhance these opportunities and the Energy Chamber will fully support these initiatives and even finance them.

Already, there have been demonstrated efforts by regional leaders to advance dialogue on a regional basis. Congo’s Minister of Hydrocarbons H.E. Bruno Richard-Jean Itoua, for example, was responsible for the crafting of the African Green Dialogue which aims to promote discussions around green energy in Africa. Launched at African Energy Week 2021 in Cape Town, the initiative marks a significant step in the journey towards a green energy future. We will have an African Green Energy Summit in Cape Town during the African Energy Week in 2022.

However, despite the progress made, the region continues to deal with significant challenges that not only hinder development but deter international investment. Red tape and bureaucracy coupled with a relatively low ease of doing business across the region serve as major inhibitors to progress. Most notably, foreign exchange currency regulation adopted by regional states represents a significant hinderance to energy sector growth. The regulation mandates the Central Bank to restrict foreign currency payments, which not only possesses a danger to cross-border transactions, but directly deters investors due to the difficulty and time-consuming approval processes. The CEMAC Forex regulation is bad and BEAC has to stop it. It hurts energy sector and kills jobs drives out investment into other regions and makes our energy sector less competitive.

If the CEMAC region is to realize its energy sector goals, scale up project developments and alleviate energy poverty, significant levels of investment are needed. Thus, the relevance of the CEMAC Energy Business Forum cannot be overstated. The conference brings together regional stakeholders for two days of dialogue, promoting exchanges and discussions so as to directly address challenges to business development.

“The AEC is proud to endorse the CEMAC Business Energy Forum, recognizing the Forum as a platform where we can have an honest discussion about how to improve the business and operating environment for energy companies in the region. Make no mistake, I will personally be in Brazzaville and will be making a case for oil and gas. Unless significant steps are taken to improve the ease of doing business, the CEMAC region will continue to experience reduced investment and slow progress. Therefore, the AEC urges stakeholders to directly address barriers to entry and operating challenges within the region, putting in place market-driven regulation that aims to drive progress, not hinder it. The BEAC Forex regulation is mess. They blew it. At the CEMAC Business Energy Forum in November, we will promote the role of regional companies, international investment, and progressive regulation,” stated NJ Ayuk, Executive Chairman of the AEC.