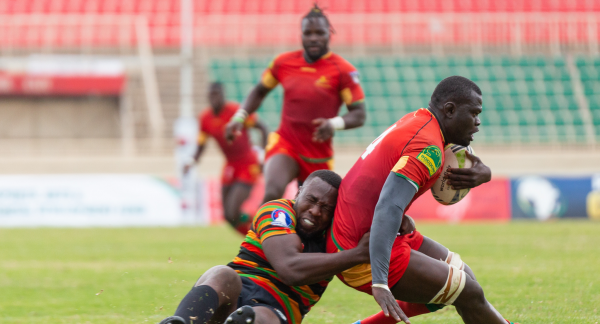 These events - U20 Barthes Trophy, Rugby Africa Women's Cup and the Rugby Africa Cup were held under a collaborative effort from Rugby Africa and its partners, the Government of Kenya through the leadership of Cabinet Secretary Ambassador Amina Mohammed of the Ministry of Sport , Culture and Heritage, the Local Organizing Committee  as well as the Kenya Rugby Union and its partners.

It saw Kenya's national teams battle it out against opposition from Madagascar, Senegal and Zambia.

When Kenya's Lionesses stepped out on the Nyayo National Stadium turf to play Madagascar's Lady Makis, everyone knew that the higher ranked Kenyans would dominate both fixtures against their visitors. The two sides had met once before, the Lionesses running off with the 35-5 result over Madagascar during the 2019 Rugby Africa Women's Cup.

Not even that fact that Kenya were breaking new ground, fielding a team devoid of their sevens players who are in Tokyo representing the country in the rugby sevens tournament at the Tokyo 2020 Olympic Games was going to deter the puritans from proclaiming a Kenya sweep.

Well, the Lady Makis had other ideas, winning both fixtures 27-15 and 10-0 respectively. The two results not only saw Madagascar register their maiden test wins but they also soared to new heights in the global rankings, 27th overall while Kenya went down one place from 24th to 25th.

This was originally meant to be a four team fixture before former champions Namibia due to the COVID-19 pandemic. Kenya, Senegal and Madagascar played a round robin fixture to determine the African U20 champion for 2021.

Kenya started the tournament with a 50-3 win over Senegal on Saturday 26 June. Madagascar would then face the Senegalese a week later, defeating them 34-3 at the same venue, setting up an exciting title decider against Kenya.

This fixture did not disappoint!

Defending champions Kenya were made to fight by a never say die Madagascar side who took the game to their more illustrious opponents. Eventually it was Kenya's U20s, Chipu as they are fondly called, retained the African U20 title with a 21-20 result over Madagascar's Junior Makis.

The senior national teams of Kenya, Senegal and Zambia converged in Nairobi in Pool B of the Rugby Africa Cup which is the African continent's pathway to the Rugby World Cup 2023 in France.

Kenya's Simbas and Senegal's Lions met in the opening fixture on 3 July, one that was expected to be straightforward for the Simbas who were ranked 32nd heading into this clash.

The 54th ranked Senegalese ripped the formbook to shreds, stunning the hosts 20-19 to have a foot in the tournament's quarterfinals in 2022. They then made sure of being in action next year with a business-like 20-5 defeat of Zambia's Copper Eagles on 7 July.

There was everything to play for when Kenya and Zambia faced off four days later, a winner takes all fixture. The Simbas raced into a 32-3 halftime lead, eventually claiming the 45-8 win at full time. The result saw them join Senegal in the next round of the Rugby Africa Cup, their Rugby World Cup 2023 dream staying alive.

The return of rugby action truly showcased the rugby values of Teamwork, Respect, Enjoyment, Discipline and Sportsmanship. It further epitomized the resilience of the human spirit, rising from what had seemed a hopeless situation nearly two years ago when the COVID-19 pandemic struck, throwing the world into a spin.

Nairobi is set to host more international action when the Kenya Lionesses play Colombia in a Rugby World Cup repechage qualifier on a yet to be confirmed date in August.