This time truly is different

Governments around the world are giving priority to measures that limit the spread of disease and save lives, including the complete lockdown of a region and even of entire countries

Workers construct what is believed to be a makeshift morgue behind a hospital during the outbreak of coronavirus disease (COVID-19), in the Manhattan borough of New York City, New York, U.S., March 25, 2020.

CAMBRIDGE – While pandemics are comparatively rare, and severe ones rarer still, I am not aware of a historical episode that can provide any insight as to the likely economic consequences of the unfolding global coronavirus crisis. This time truly is different.

A key feature of this episode that makes it unique is the policy response. Governments around the world are giving priority to measures that limit the spread of disease and save lives, including the complete lockdown of a region (as in China) and even of entire countries (Italy, Spain, and France, for example). A much longer list of countries, including the United States, have imposed strict international travel bans and prohibited all manner of public events.

These measures could not be further from the policy response to the deadliest viral outbreak of modern times, the 1918-19 Spanish influenza pandemic (see chart). That pandemic, which claimed 675,000 lives in the US and at least 50 million worldwide, occurred against the backdrop of World War I. This fact alone precludes drawing any meaningful comparisons regarding the effects of the COVID-19 pandemic per se on the US or global economy. 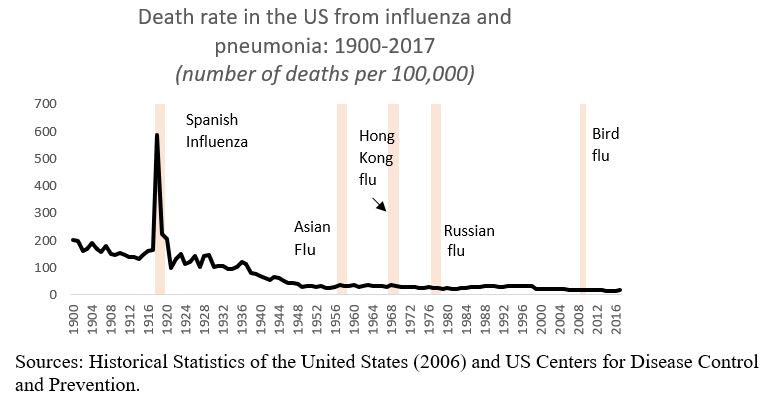 In 1918, the year in which influenza deaths peaked in the US, business failures were at less than half their pre-war level, and they were lower still in 1919 (see chart). Driven by the wartime production effort, US real GDP rose by 9% in 1918, and by around 1% the following year even as the flu raged. 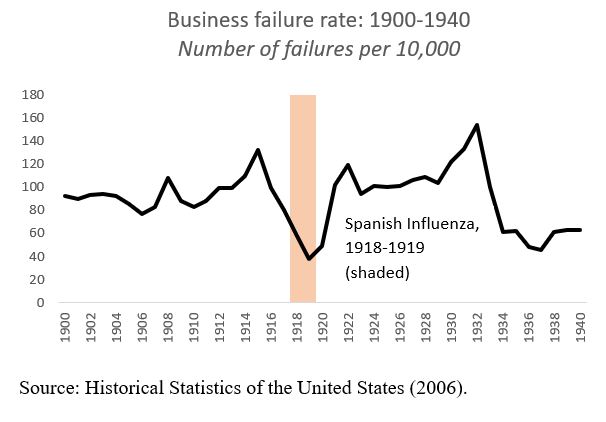 With COVID-19, by contrast, the vast uncertainty surrounding the possible spread of disease (within the US and globally) and the duration of the near-economic standstill required to combat the virus make forecasting little different from guessing. But, given the scale and scope of the coronavirus shock, which is simultaneously cratering aggregate demand and disrupting supply, the initial effects on the real economy are likely to surpass those of the 2007-09 global financial crisis (GFC).

While the coronavirus crisis did not start as a financial crisis, it may well morph into one of systemic severity. At least until reduced economic activity results in job losses, US household balance sheets do not appear problematic, as they were in the run-up to the GFC. Banks, moreover, are much more strongly capitalized than they were in 2008.

Corporate balance sheets, however, look far less healthy. As I observed over a year ago, collateralized loan obligations (CLOs), issuance of which has expanded briskly in recent years, share many similarities with the notorious subprime mortgage-backed securities that fueled the GFC.

The search for yield in a low-interest-rate environment has fueled waves of lower-quality lending – and not just in CLOs. Unsurprisingly, therefore, the recent stock-market crash has exposed high leverage ratios and increased default risks.

As if the coronavirus shock were not enough, the Saudi-Russian oil war has nearly halved oil prices, adding to the predicament of the US energy sector. With much of manufacturing hit by supply-chain disruptions, and broad segments of the service sector more or less paralyzed, corporate defaults and bankruptcies among small and medium-size businesses are set to spike, despite fiscal and monetary stimulus.

Furthermore, as the 2020 coronavirus crisis unfolds, the similarities between high-yield corporates and developing-country sovereigns appear to be sharpening.

In the last five years, however, emerging-market balance sheets (both public and private) have deteriorated, and growth has slowed significantly. Other things being equal, the US Federal Reserve’s recent significant interest-rate cut and other measures in response to the pandemic should ease global financial conditions for emerging markets, too. But other things are far from equal.

For starters, the classic flight to US Treasuries in times of global stress, and the surge in the VIX volatility index, reveal a sharp increase in risk aversion among investors. These developments usually coexist with sharply widening interest-risk spreads and abrupt reversals of financial flows as capital exits emerging markets.

In addition, the crash in oil and commodity prices reduces the value of many emerging-market exports, and hence affects these countries’ access to dollars. In the more extreme (but not unique) case of Ecuador, for example, these risks have translated into a sovereign spread approaching 40 percentage points.

Finally, China’s economic growth was an important driver of its significant lending to over 100 lower-to-middle-income developing countries in the last decade, as I showed in a recent paper with Sebastian Horn and Christoph Trebesch. The spate of weak Chinese economic data for early 2020 thus raises the likelihood of substantially reduced outward loans.

Not since the 1930s have advanced and emerging economies experienced the combination of a breakdown in global trade, depressed global commodity prices, and a synchronous economic downturn. True, the origins of the current shock are vastly different, as is the policy response. But the lockdown and distancing policies that are saving lives also carry an enormous economic cost. A health emergency can evolve into a financial crisis. Clearly, this is a “whatever-it-takes” moment for large-scale, outside-the-box fiscal and monetary policies.

Insuring the survival of post-pandemic economies

When "whatever it takes" isn't enough

States have upper hand in health vs. economy row