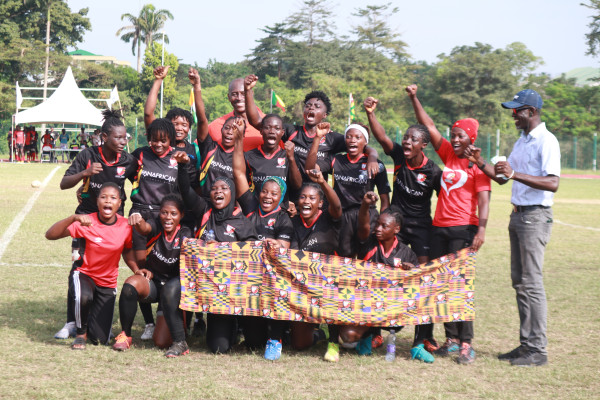 As the Ghana Rugby Union increases efforts to expand rugby in the country, female rugby players have called on local authorities to provide more support for women.

Some of the female players, speaking in an interview after the Rugby 7s World Cup Qualifiers in Kumasi at the weekend, said the Ghana Ruby Union continues to play its part but there is still more to be done.

Several young and vibrant females put up an exceptional performance as some gained recognition for their individual brilliance in the well-organised tournament.

Ghana’s female Captain Paulina Mensah received the top scorer award in the female category. She started playing rugby only two years ago and now aims to take the sport a notch higher in the years ahead. Having maintained a good run through the game and helping her team qualify to the next stage of the competition, she remained focused on making herself ‘’proud’’ on the international stage in the future.

“I run fast and I don’t give up early so I took my chances when I got them. We did not underrate any team we only managed to put our best forward in the competition. We are going to play at the commonwealth games in Tunisia and from there we will go to the World Cup afterwards if we win.”

Gifty Dazam, a centre player in the Ghana Team who also started playing rugby three years ago said the game had enabled her to build her confidence since she started.

“Right after school I was introduced to the game. I could not play in this tournament due to an injury but I hope to be part of the team that goes to the next level.”

It is for this reason Rafatu Inusah, Women’s Representative of the Ghana Rugby Union and Rugby Africa’s Unstoppable maintained that authorities need to pay more attention to rugby and females in general just as they focus on other sports. She however noted that a lot younger girls were being motivated to join the game and more of such recruitments would be done in the years ahead.

“Women’s rugby has improved in the last year and we are grateful to the leadership of the Ghana Rugby Union for the support they continue to give to women rugby in Ghana. The next level would be challenging and we hope to bring on board more young girls to boost our performances. We are trying to develop rugby across Ghana it is going to grow as time goes by.”