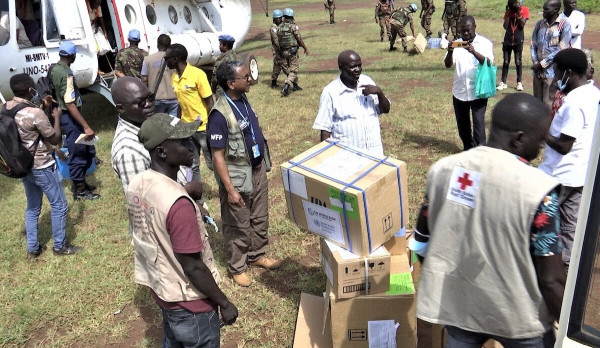 “A heavy rain made the River Mori overflow, which flooded the area where I live. I and my children narrowly escaped dead,” recounts Alice Marawa, a resident of Mundri West County and mother of six, tears flowing as she speaks.

She is one of the recently displaced persons living in the county, located in Western Equatoria State. Four of her mud huts collapsed, and her farm was destroyed.

“Our crops were just swept away: maize, sweet potatoes, sorghum – it is all gone”.

Women, children and the elderly make up the lion part of those who have been forced to leave their homes.

“We are hosting them in our church with the limited shelter we can afford. Their situation is dire, you see children hungry and dried up. I am worried about a cholera outbreak,” said Pastor Robert Hassen of the Episcopal Church of South Sudan.

County Commissioner Zelpha Dawa says that local authorities are doing what they can to assist those in need, and to prevent future damage made by atypical rains caused by climate change, but significant external help is needed.

“So far, our records show that 29,796 people have been displaced from their homes. We are urging our partners to support our efforts to salvage the situation,” he says.

And help is on its way. Thomas Bazawi, a Protection, Transition and Reintegration Officer serving with the United Nations Mission in South Sudan (UNMISS), recently visited the affected area and says that the peacekeeping mission has increased its air patrols to assist in assessing the situation on the ground.

“We have been able to alert the county and state authorities to advise them that their fundamental role will be to protect the lives of civilians in Mvolo, Mundri West and other areas affected by relocating communities to higher and safer grounds,” he said, adding that a long-term solution to deal with future floods is needed to avoid repeats of what is currently going on.

Single mother Rejoice Karama is deeply concerned about the future of her children.

“We run around in disarray, and here we are, sheltering under trees, verandas, and sometimes in the open, with literally nothing to eat. It is hard to imagine that we have lost everything we had,” she said.

“We are able to bring emergency medical supplies as the women group indicated some shortages. We have witnessed the way they are surviving at the church shelter with a lack of non-food items, but there is also a need for food and wash, sanitation and hygiene facilities. We will do our best to meet some of the critical gaps and hope to come back with a response team, says Russom Habtegabriel, who works for World Food Programme in Western Equatoria.

As the humanitarian partners plan for the arrival of a response team, the challenge of road access remains.

“We will mobilize necessary machinery to rescue the trucks so that the road is open for supplies,” Mr. Habtegabriel said.

While UNMISS peacekeepers and humanitarian partners are working hard to assist, communities hosting those who have been displaced are also showing great goodwill. They are offering those most in need food, clothes and other useful items, but such support is limited and short-term.