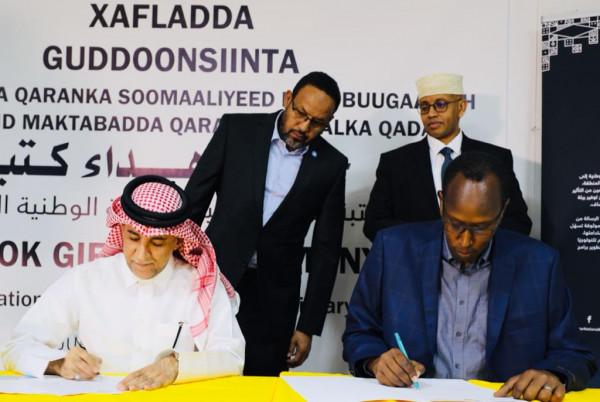 Qatar National Library (QNL) donated more than 4,000 books in various fields of knowledge, culture and scientific research to the Somali National Library (SNL), and this comes within the framework of cooperation between the two countries in the educational and cultural fields.

HE Minister of Information Culture and Tourism for the Federal Government Osman Abukar Dubbe, thanked in his speech the government and people of Qatar for their generous support, stressing that Somalia is grateful for the permanent and fraternal support from the State of Qatar, noting that books are among the most precious gifts and that whoever gave you a book has contributed to increasing your knowledge and culture.

In turn, HE Minister of State for Education, Culture and Higher Education in Somalia Abdullah AbuBakr Hajji, thanked the government and the State of Qatar for the continuous support of Somalia and the dedication of more than 4,000 books from Qatar National Library to the Somali National Library, pointing out that Qatar's giving is not strange because it is a pioneer in providing support to Somalia, adding that the State of Qatar has previously funded a number of humanitarian and infrastructure projects, such as the Mogadishu-Afgoye road, in addition to the construction of some government headquarters.

In his speech, Director of the Somali National Library Dr. Mohammed Ahmed Sheil said that the books donated by Qatar National Library are of scientific value and help enrich the National Library with reference books, indicating that this is the beginning of the relationship between the two libraries in exchanging experiences and archaeological materials, and thanked the government and people of Qatar for their efforts in supporting Somalia and standing by it in difficult times.

For his part, HE Qatar's Ambassador to Somalia Hassan bin Hamza Hashem, said in his speech that QNL's donation of 4,000 books to the SNL comes within the framework of cooperation between the two countries in the fields of education, culture and scientific research, and comes within the framework of continuous support of brothers from Qatar to their brothers in the Republic of Somalia, in support of stability and progress, and to achieve the mission of Qatar Library in preserving heritage and creating a reliable information environment, because it aspires to be one of the world's distinguished centers in the fields of learning, research and culture, adding that these achievements would not have been achieved without the depth of strong fraternal relations under the leadership of HH the Amir Sheikh Tamim bin Hamad Al-Thani, and HE President of the Federal Republic of Somalia Mohamed Abdullahi Farmajo, as well as between the peoples of the two countries.