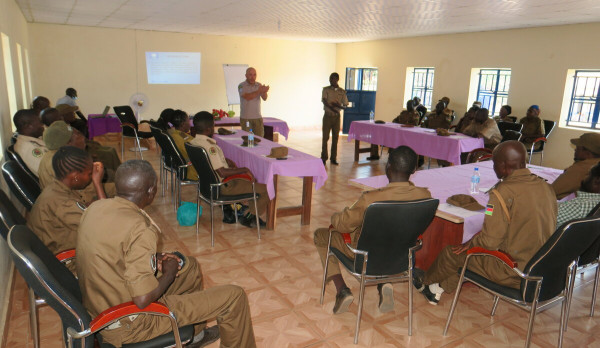 “As a prison official, it’s important for me to know how to uphold the rights and dignity of every inmate,” said Major Alex Yairo, a prison warden in Yambio, Western Equatoria, South Sudan.

Major Yairo was speaking after a two-day workshop organized by the United Nations Mission in South Sudan (UNMISS), on human rights and gender sensitivity, for 30 prison officers.

The training sessions were run collaboratively by United Nations Police (UNPOL) officers serving with the UN Peacekeeping mission and administrators from the state prison services.

The main aim: To enable prisoners to serve out their sentences in decent conditions and help their eventual reintegration into society upon release.

“The other important aspect I learned from this training session is how to properly cater to the needs of female and juvenile prisoners, who have completely different sets of needs respectively,” added Major Yairo.

“For someone accused of a crime to reform their ways, they must be treated with dignity while incarcerated,” stated the First Lieutenant. “Currently, the conditions in our prisons are not conducive towards inmate reformation and this hampers their ultimate reintegration into society.”

First Lieutenant Pee’s views are echoed by her colleague Elizabeth Arminio who requested UNMISS to continue building capacities among prison officials across Western Equatoria through similar interventions in future.

“You are the bedrock upon which the South Sudanese corrections system rests,” said Gloria Karikari, an UNPOL officer, speaking to participants at the conclusion of this activity.

“It falls on all of you to ensure that no prisoner has their fundamental human rights infringed upon. It is only with empathy and kindness that persons who have, in the past exhibited criminal behavior, will be able to complete their sentences and rejoin their communities as productive citizens.”

African students wonder what next after Ukraine war upends education

No school In Zimbabwe after government suspends 90% of teachers

Uganda gets $2mln from UK, Ireland for safe reopening of schools