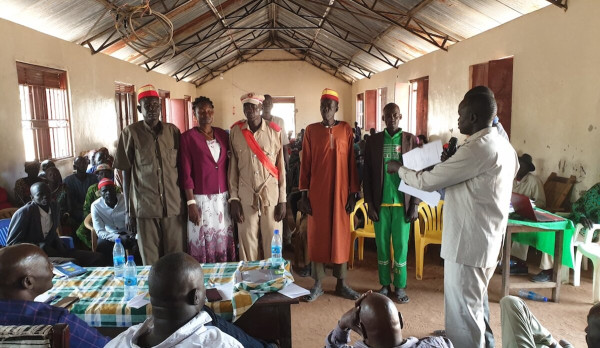 What to do when the migration of cattle causes numerous thefts of prized animals, ruined crops, intercommunal tensions and deadly violence?

The United Nations Mission in South Sudan invited stakeholders involved in and affected by the longstanding feuds to a two-day conference aimed at agreeing on rules to regulate the movements of cattle and handle any conflict that may still arise.

“We don’t want any of this fighting. Life is no good when people fight, because we can only enjoy freedom, education, and health services if there is peace. As women, we must tell our children not to get involved in conflicts,” said women’s representative Rose Yar Ater, eloquently summing up what is at stake.

Fortunately for Ms. Ater and approximately a hundred other participants, including cattle camp youth, chiefs and local authorities from across Cueibet County, progress towards more harmonious relations was made. In fact, a total of 21 resolutions were passed to prevent conflicts related to cattle migration and deal with the animosities that may still be provoked.

Highlights include agreements to return stolen animals to their owners, share water points amicably and send chiefs to cattle camps to keep an eye on the youth guarding the cattle. A comprehensive disarmament of civilians campaign is also set to be undertaken, and a fifteen-person-strong cattle migration committee tasked with monitoring cattle movements and issue early warnings in case of threats of conflict.

The Minster of Peacebuilding in Lakes State Matur Beny said the conference recommended the formation of a fifteen-member committee headed by the commissioner and will be responsible for overseeing the internal cattle migrations, protection of farmers and inter-sectional conflicts in the county.

“This committee will also be responsible for overseeing the protection of property and inter-sectional conflicts in the county. People shouldn’t be moving with cattle from one place to another without informing the committee so that pastures can be better used and hatred among youth avoided,” said Matur Beny, Lakes State’s Minister of Peacebuilding.

Curbing ways of inciting hatred was high on the agenda of Cueibet County Commissioner Isaiah Akol Mathiang, who urged those attending the conference to spread the word among their respective communities.

“I want those who compose songs promoting hatred and violence to know that the fine for this will be 25 cows,” the Commissioner remarked, while also requesting community leaders to report back on the implementation of the resolutions reached at the event.

Khalif Farah, a Civil Affairs Officer serving with the peacekeeping mission, called the gathering unique and symbolic because it represented the first time some of the participants met since serious inter-sectional conflict broke out a couple of years ago.

“Today you who are making a big statement by saying that enough is enough, no more fighting. Now you need to build on this restored trust, nurture it and make it grow into sustainable peace among yourselves and between communities,” he said.

2023 recession is certain or likely to happen, say 70% of logistics execs

Moody's cuts Egypt rating to B3, changes outlook to stable

Is it a good time to buy a two-bedroom apartment in Dubai, or should I rent it?