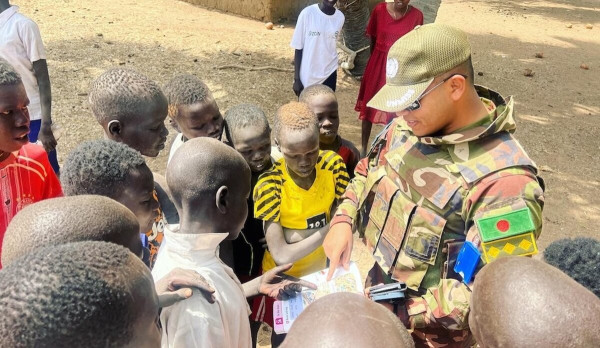 Residents in Akoc in Warrap State’s Twic County have not been spoiled by visitors from afar lately. In fact, heavy flooding has left them cut off from others for almost six months, with their humanitarian situation having deteriorated as a result.

“It’s been relatively calm here over the last few months, so floods wreaking havoc are our main concern. Tens of thousands of people remain displaced as they have no way of repairing their houses and resume their livelihoods,” says payam (administrative division) administrator Tong Lual Wol.

He was talking to an aviation patrol team made up of military and civilian peacekeepers serving with the United Nations Mission in South Sudan, who made the flight to assess the security and humanitarian situation in the area.

Residents fear that tensions may arise when the rainy season begins and nomadic people from Sudan leave Twic County.

“There are usually some disturbances before they depart,” says local youth leader Madut Mawein. “That is why we appreciate the peacekeeping mission’s efforts to bring us all together to talk. Communication instills confidence in us,” he adds.

The women who have stayed in Akoc rather than look for better opportunities elsewhere are concerned about teachers not being paid, thus jeopardizing the education of the community’s boys and girls. They are, however, taking initiatives to improve their own lot.

“We have become inspired by the work the peacekeeping mission puts in to empower women in South Sudan. As a result, our women operate a small business in the local market, growing vegetables for sale,” says Riak Loul Mayulo, Chairlady of the community’s women’s group. “I hope the government and development partners can construct better roads that will allow us to keep going when the rainy season begins, otherwise we will become isolated, and it won’t be feasible.”

While Roda Sube, a Gender Affairs Officer serving with UNMISS in Kuajok, is happy with the efforts of her sisters in Akoc, she also urged community leaders to increase women’s political representation and participation in decision-making processes.

South Sudan’s revitalized peace agreement stipulates that women should be given at least 35 per cent of all politically appointed posts.

Furniture 360 concludes after attracting over 30,000 visitors

Shape your future success in LEAP 2023 in Saudi Arabia

India's capital blanketed in smog despite drop in stubble burning