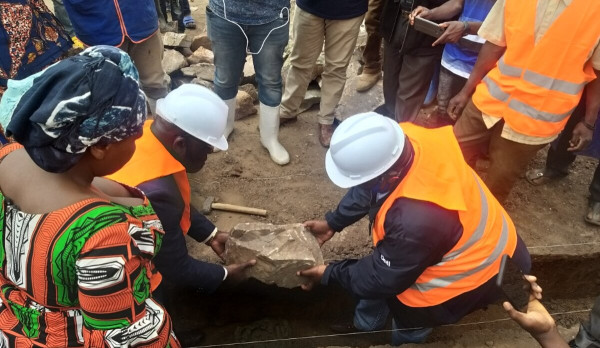 Construction work of a market in Mulo was launched on Thursday, January 27. This is one of the districts of the rural municipality of Lubero in the territory with the same name. The ceremony took place in the presence of the mayor of the municipality, Joseph Bwalikusha; MONUSCO representative, Alain Muongu, many churches, and community leaders as well as members of the local population. This project – This MONUSCO-funded project to the tune of $ 90,000 - is the first of four others to be launched in this territory.

According to Alain Muongo, MONUSCO focal point in Lubero territory, the project launched by MONUSCO Civil Affairs section, which begins in Mulo, will also expand to Lubero-centre, Kirumba and Kanyabayonga, where the work is scheduled to start in early February 2022. The first project on the Mulo-based market will also include modern sheds over a surface area of ??249 sq. meters; four latrines, a market committee’s office, to be fully equipped, as well as a warehouse. Solar panels to light the premises will also be installed. The cost of all these works amount to nearly $ 90,000, fully funded by MONUSCO.

In total, 35 young people at risk (25 boys and 10 girls) as well as 10 vulnerable women will benefit from the direct impacts of the project through paid labour. This is a pilot project under the supervision of the NGO UDIK (Union for the Integral Development of Kivu), designed to help the professionals involved to train participants in carpentry, masonry or installation of the solar panels. Thus, the project will contribute not only to the socio-economic reintegration of the young people and women who will carry out the works, but also to the acquisition, for the latter, of technical expertise that will be useful for them in the future.

Reviving economic activities in the region

It is worth noting that local communities will also indirectly benefit from this project, since once finalized, the markets will contribute to the revival of the economic activities in this region, seriously affected, for several years, by conflicts and insecurity caused by armed groups. Since markets are also meeting venues, their existence will help to create social cohesion with the various neighboring communities whose tensions are often the basis for the recruitment of young people by community militias.

As one of the objectives of the DDRCS (Disarmament, Demobilization, Community Recovery and Stabilization) is to contribute to the acceleration of the revival of the economic activities in areas controlled by armed groups, which are in the grip of insecurity and those emerging from conflicts, MONUSCO project thus aims to assist the government in the implementation of its new stabilization program in the territory of Lubero where more and more armed groups are opting for laying down weapons.

In any case, for Joseph Balikwisha, the mayor of the rural municipality of Lubero has applauded MONUSCO’s action in these terms, “the project for the building of several markets will have a double impact for the territory of Lubero, in particular on the social and economic levels. It is a plus for this territory, yet one of the agricultural breadbaskets of North Kivu, whose population unfortunately still languish in misery due to insecurity”.