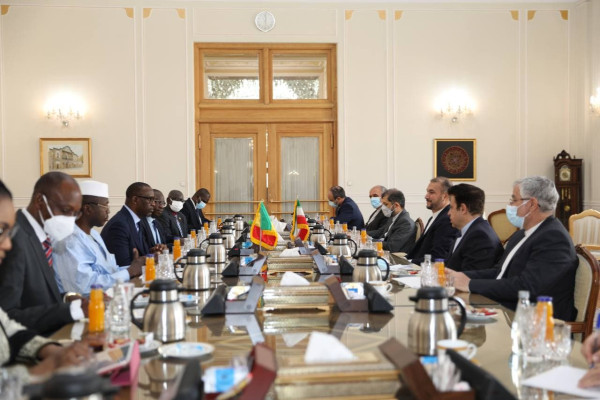 Iranian Foreign Minister Hossein Amir Abdollahian hosted his counterpart from the Republic of Mali, Abdoulaye Diop, and his accompanying delegation on Sunday.

In the meeting, the two sides exchanged views about various topics of common interest at bilateral, regional and international levels.

The Iranian foreign minister pointed to the significance of mutual trips by officials of the two countries for the expansion of bilateral ties and highlighted the status of Africa in the Raisi administration’s foreign policy.

Amir Abdollahian stressed the Iranian administration’s serious determination for the all-out enhancement of exchanges and interactions with Mali in all areas of bilateral interest.

He pointed to the Islamic Republic of Iran’s achievements in different scientific and industrial spheres, including in health, medication, and medical supplies, expressing Tehran’s readiness to share these achievements with and transfer of technologies to the friendly country of Mali.

For his part, Diop expressed gratitude for the Iranian side’s invitation and hospitality, voicing his country’s preparedness to boost bilateral ties, particularly in trade and economy.

The Malian foreign minister enumerated areas of bilateral cooperation and invited Iranian companies to his country.

The two sides also stressed the necessity of broadening cooperation in the areas of mutual interest, including in education, health, modern technologies, animal husbandry, energy, and especially solar energy.

They agreed on drawing up a road map for cooperation at the earliest.

Meanwhile, given the scope of bilateral cooperation, the two foreign ministers decided to set up a joint cooperation committee between the two countries and convene its first session in the Malian capital of Bamako in the near future.

The Malian foreign minister also invited his Iranian opposite number to visit Bamako. Amir-Abdollahian accepted the invitation and it was decided that the trip take place at the earliest time possible.

Distributed by APO Group on behalf of Ministry of Foreign Affairs - Islamic Republic of Iran.