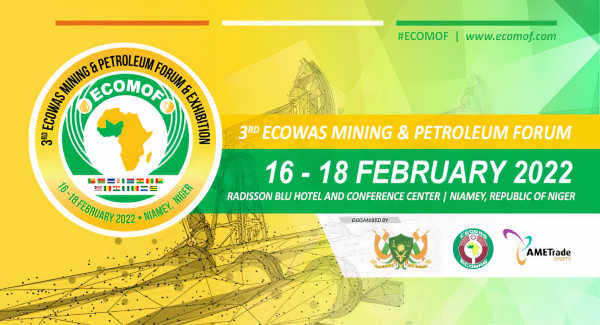 The African Energy Chamber (www.EnergyChamber.org) will be leading a delegation to Niger for the ECOWAS Mining and Petroleum conference in Niamey, Niger 16-18 February 2022. Top on the agenda, will be discussions highlighting the significant opportunities that Niger offers investors, explorers, service companies and engineering companies in oil and gas, mining and energy. Discussions will also address the transformational impact, that the oil and gas sector is likely to have on Niger’s economy for the coming decades, as well as ways in which the government can continue to improve the operating environment to attract even more energy investments, with a focus on creating good paying jobs for Niger’s youthful population.

Niger’s oil and gas industry by 2025 is expected to represent approximately 24% of GDP, 45% of tax revenues and 68% of exports as well as 8% to 12% of formal employment in Niger. Niger’s current oil reserves have estimates of 3,754 million barrels of oil reserves in place and 957 million barrels of recoverable oil reserves. Current gas reserves in place are estimated at 34 billion cubic metres with recoverable reserves of 24 billion cubic metres.

A nation primed for significant oil and gas investments

Niger is fast developing itself into an attractive destination for oil and gas investments under the leadership of the President, H. E Mohamed Bazoum, taking conscious and aggressive steps to set the stage for a boom in exploration for more hydrocarbons in its prolific basins, as well as develop infrastructure to connect Niger as a producer with markets in the region and beyond.

First oil from Chinese Major CNPC’s Agadem Rift Basin assets, is expected in mid 2023 when the 1,275 KM Niger-benin-crude-pipeline is completed, months ahead of schedule and despite delays related to the Covid-19 pandemic. This is also a testament to the success of Petroleum and Energy Minister, H.E Mahamane Sani Mahamadou’s approach of continuously engaging all stakeholders in the pipeline project, to ensure that delays are avoided. The pipeline once completed, will lead to Niger’s daily production output to jump from 20,000 barrels a day to 110,000 barrels per day.

Niger’s relatively low per-barrel cost ($15) of production, including research, development and exploitation), and an accomplished export pipeline is expected to act as a magnate for new entrants interested in Niger’s currently 41 available blocks. The government is finalising a review of its existing acreage, with a view of bringing in regulation that will facilitate seismic acquisition and encourage drilling. Other successful players in the Nigerien upstream industry include SIPEX, a wholly owned subsidiary of Algeria’s SONATRACH and British independent Savannah Energy. Niger’s procedure for awarding petroleum blocks is fast and transparent. Both Savannah and SIPEX recently received governmental approval for extensions in record time on their PSCs ensuring contractual stability and the commitment of government to provide the explorers with the right incentives for asset development. Savannah has identified 146 potential exploration targets in total to consider drilling in the future and has had 100% success rates on five wells drilled after the maiden exploration drilling campaign in 2018.

The Agadem Rift Basin acreage explored by CNPC has estimated 2P recoverable reserves of 815 million barrels and an exploration success rate of 81%. Adding to the favourable investment conditions, the tax regime in place, which includes exemption from VAT and customs duties (for the exploration phase and the first five years of exploitation), Oil Tax of between 40% and 60%, a royalty rate of 12.5 % and a Cost Stop rate of 70% is very competitive when compared globally.

In November 2021, during his keynote speech at African Energy Week in Cape Town, Minister Mahamane Sani Mahamadou announced a strong push by his government towards gas monetisation. This is expected to include gas-to-power projects, as well as the development of pipeline infrastructure to Northern Nigerian markets.

“Equipped with its oil and gas producing potential, high oil exploration success rates, attractive tax regime, relatively low operational cost and various energy policies already in place, Niger is fast becoming the prime example of what needs to be done to attract investment and make it benefit everyone in the country” said NJ Ayuk, Executive Chairman of the African Energy Chamber.

While Niger once imported 80% of electricity, it’s now only imports over 60% of the power it needs and the trend is likely to continue towards self-sufficiency. This represents an opportunity for project developers, energy businesses, organisations and financiers to unlock electricity access to millions of people who have don’t have power.  Niger has taken steps to improve electricity access, such as the national strategies for electricity access such as the National Electricity Policy Document (DPNE) and the National Strategy for Access to Electricity, accompanied by a Master Plan for Access to Electricity by 2035. Niger also ratified the Energy Charter (1991) and the international energy charter in 2015. The Energy Charter Treaty represents the best international instrument which ensures investment protection. In addition to petroleum investments, Niger has seen growing investment opportunities in solar energy with the hopes of increasing the nations electrification. The various current projects  include: the Niger Solar Electricity Access Project (NESAP) funded by the World Bank,  Niger Accelerating Electricity Access Project (HASKÉ) approved in December 10, 2021 by the world bank in the amount of $317.5 million to support grid electrification, solar PV powered mini grids, off-grid solar electrification of public institutions and households, and clean cooking.