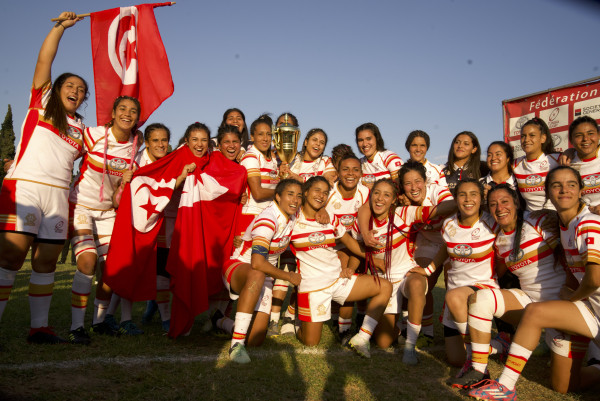 Tunisia’s women’s team played Cote d’Ivoire, who had lost to Senegal in the previous match on October 17th at El Menzeh Rugby Ground in Tunisia’s capital. Tunisia seemed to have found their feet with the 15s game to win by a mile scoring 61 points to nil.

Tunisia started strong, passing the ball and sprinting out hard and committed early on to moving the up the field and keeping it close to the soaring zone. In the first few runs though Tunisia underestimated the strength of Cote d’Ivoire’s defenders only to run straight into their tackles. Although much slower Cote d’Ivoire surrounded the fleet footed Tunisian players like a pride of lions, swiftly bringing them down.

After a few run ins to Cote d’Ivoire’s killer tackles Tunisia quickly adapted and upped their fast passing game sending the ball out wide onto the wing and bringing in their first try in the first eight minutes by No. 14 Ranim Madouri. After that Tunisia hit their stride and became like a well oiled machine, moving the ball forward with a much longer game.

The Tunisian team showed greater unity as a team than they had done in their first match against Senegal. Despite being occasionally snarled up in Cote d’Ivoire’s tackles and scrums Tunisia kept up the pressure with a fast paced technical game

After Madouri’s try, No. 10 Ameni Ben Salem scored a perfect conversion. For the rest of the match she proved herself to be a precise and effective penalty and conversion kicker. Madouri’s confidence was visibly growing, as she put in some spectacular turns of speed. Realizing that she never had to eat dirt, she dodged and weaved around Cote d’Ivoire’s defenders to score. In her final scoring run of the first half, she sprinted in a perfect arc to score on her feet, leaving Cote d’Ivoire’s defenders lumbering in her wake.

At the end of the first half Tunisia had scored 30 points with Cote d’Ivoire having failed to even get the ball far up enough the field to dream of scoring a try.

Tunisia’s team manager Abdelaziz Chaouachi Was pleased with Tunisia’s strong showing in the first half, he “the team is now getting used to playing 15s, now the ball is moving as it should, it’s about how the players move, but about how the ball moves,” he said.

In the second half, Cote d’Ivoire seemed more assertive trying to the push the push up the field faster but Tunisia quickly took control of the ball to score another try in under four minutes of play.

For the early part of the second half it was a try/conversion killer combo by Madouri getting balls over the line and Ben Salem kicking them across the bar.

After a series of substitutions it was No. 16 Abire Dhaheri, a late substitution who brought home the next try and No. 11 Rihab Hamouda, but it was the kicking machine Ben Salem who launched the conversions over the bar, to bring the final score to 61-0 to Tunisia.

Tunisia’s team coach, Malick Tcha-Tchibara said that Tunisia’s win was down to the new skills they had developed “they improved their communication, it was much clearer, it is easier to play when communication is clear, they decided to work hard and to go deep and move the ball.”

A jubilant captain, No. 9 Meriem Mekni could not stop smiling after wining, said “we had a strategy to play long, because we saw that Cote d”Ivoire play a very close short game with tackles, so we went deep and wide.”

Abdelaziz Chaouachi said “that after the game against Senegal Tunisia ranked 32 in the world, we are hoping that this tournament win will take us into the top 20.”

Kraken to focus on its “most mature” markets, reviews options on UAE’s ADGM licence

China to give Turkey $6mln in emergency aid for earthquake relief

Death toll from earthquake in Turkey nears 3,000, at least 1,444 in Syria as rescuers search for survivors

Dubai: Can tenant be penalised for ‘bounced’ direct debit payment?