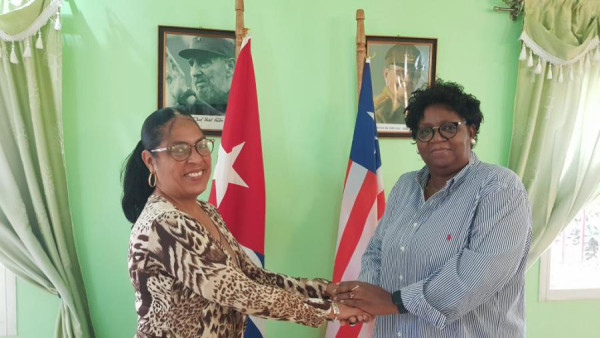 In the morning hours the Secretary General of the regional organization Mano River Union Her Excellency Ambassador Medina Wesseh Esq, who was received by the head of mission of Cuba in Liberia Mercedes L. Martinez Herrera, visited the headquarters of the Cuban Embassy in the West African country.

The atmosphere was conducive to exchange on the possibilities of cooperation that are open to Cuba and the Mano River Union, a regional organization that brings together Liberia, Ivory Coast, Sierra Leone and the Republic of Guinea.

The Secretary General of the regional organization thanked Cuba for the training of human resources and highlighted the humanitarian work of Cuban doctors in the world.

The Mano River Union is an economic union integration project that was launched by the African countries of Liberia and Sierra Leone in 1973. The name of this project is due to the fact that the Mano River is the natural border between these two neighboring countries. Guinea and Ivory Coast joined this economic union in 1980 and 2008, respectively.

Millennials home in on Dubai