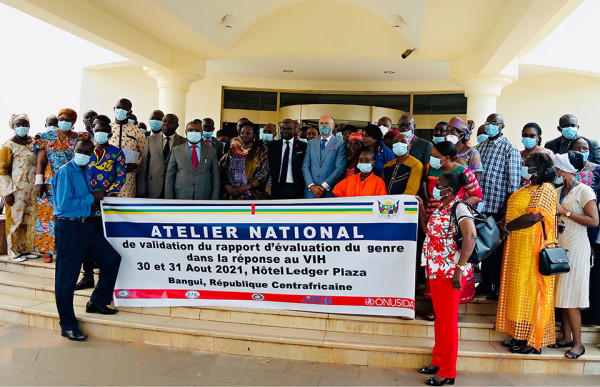 Alida Nguimale is a survivor. She has been living with HIV for 21 years in the Central African Republic. Some 10 years ago, she lost two of her children to AIDS-related illnesses. At the time, she was unaware that she was living with HIV, and life-saving antiretroviral therapy and medicine to prevent mother-to-child transmission of HIV were rare in the Central African Republic.

Speaking at the opening ceremony of a national workshop on HIV and gender, co-organized by the Ministry of Gender, the Ministry of Health, the National AIDS Council and UNAIDS, in Bangui, Central African Republic, on 30 and 31 August, Ms Nguimale explained how she was expelled from her home by her abusive partner, who accused her of bringing HIV into the household. She also recounted her helplessness in the face of denial and violence by her partner, who had refused to accept his own HIV-positive diagnosis.

Ms Nguimale’s story illustrates the vulnerability to HIV of women in the Central African Republic and the barriers that they face in accessing health services. More than 56% of all new HIV infections in the country in 2019 were among women and girls, and 60% of all people living with HIV in the country are women. According to data from the MICS-6 survey published in 2021 by the government, with the support of the United Nations, 23.6% of women and girls between the ages of 15 and 49 years were married or entered into a marital union before the age of 15 years. More than 21% of central African women had undergone female genital mutilation. In January 2021 alone, 340 cases of gender-based violence, including 72 rapes, were collected by the gender-based violence information management system in the Central African Republic.

“The vulnerability of women and girls to HIV in the Central African Republic is the consequence of protracted insecurity, violence and humanitarian crises compounded with toxic masculinities and negative social norms. There can be no end of the AIDS pandemic without renewed action and accountability to end this plague of gender-based violence and the social marginalization of women,” said Denise Brown, the Deputy Special Representative of the United Nations Secretary-General in the Central African Republic, Humanitarian Coordinator and United Nations Resident Coordinator.

For the first time, the Government of the Central African Republic, with the support of UNAIDS, conducted a thorough assessment of the gender dimensions of the HIV epidemic and response in the country. The assessment report, which was discussed and adopted during the national workshop on gender and HIV, warned that women, girls and key populations are being left behind in the recent progress made against HIV in the country. HIV prevalence is highest among sex workers, at 15%, and among gay men and other men who have sex with men, at 6.4%, compared to 3.6% among the general population. Access to prevention of mother-to-child transmission of HIV services also remains worryingly low, with less than 25% of women accessing such services in three of the country’s seven health regions.

“The gender assessment report alerts us on a blind spot in our response. We must refocus our efforts on transformative interventions that work for women, girls and key populations,” said Pierre Somse, the Minister of Health of the Central African Republic.

Building on the recommendations of the gender assessment, the participants of the meeting developed and adopted an action plan to implement key interventions in 2021–2023. The action plan includes a combination of structural, biomedical and behavioural interventions to promote gender-transformative education and sensitization, to address the legal, social and cultural barriers to access to HIV services by women, girls and key populations, to implement differentiated models of care that promote access to health, social and psychosocial services for women, including for prevention of mother-to-child transmission of HIV, and to ensure accountability for progress on gender, HIV and tuberculosis. The Minister of Gender, Marguerite Ramadan, noted that the assessment report and the action-oriented operational plan that ensued are essential to implement the vision of equality in the 2021 United Nations Political Declaration on AIDS.

Expressing satisfaction after the adoption of the operational plan, Patrick Eba, the UNAIDS Country Director for the Central African Republic, said, “UNAIDS is at its best when it brings together government, civil society, development partners and other stakeholders to critically assess the national response to HIV and articulate a collective agenda for action. There is no better way to vindicate the rights of those millions of women like Ms Nguimale who demand dignity, justice and health.”