CEO says Aqeed's shareholders, which include companies specialising in reinsurance and media buying, bring more than money to table

For a start-up, insurance technology (insurtech) firm Aqeed has succeeded in making itself well-known since launching across the United Arab Emirates in April.

Many UAE residents may still be unsure as to the purpose of the Dubai-based company, which raised $18 million in a Series A funding round prior to its launch, but few will have missed its billboard advertisements that adorn entire sections of the multilane Sheikh Zayed Road in Dubai, the E11 highway route towards Abu Dhabi and wraparound adverts covering Dubai trams.

Of course, it helps that one of the company’s main shareholders is an investment arm of Choueiri Group, the Lebanon-based media buying specialist, which has been joined in the venture by some of the shareholders behind London-based reinsurance business Barents RE.

In an interview with Zawya, Aqeed chief executive Rachid Abi Nader declined to comment on whether these advertisements were bought at a discount, stating “those are confidential, internal arrangements”, noting “we pay for everything we do”.

“We will not comment on the rate, if we have an advantage or not on what we are paying, but I can tell you we’re really fortunate to have such shareholders. Whether (Chouerei Group investment fund) Equitrust or the shareholders behind Barents RE, they are bringing much more than money to the table,” said Nader.

Aqeed plans to use technology to disrupt the UAE insurance sector’s operating model, which usually requires customers to go through a broker to reach an insurance firm that then writes a policy, with some of the policy’s risk - sometimes through another broker – subsequently passed onto a reinsurer.

For the shareholders behind Barents RE, Aqeed offers direct access to a large customer pool without having to go through insurers or brokers. For Chouerei’s Equitrust, it is a chance to leverage the company’s own skills to have a stake in an insurtech business that could quickly become a leader in what remains a nascent market.

Both Nader and Aqeed’s chief product officer Hadi Radwan were guarded about the company’s business model, citing competition concerns, but Nader said “the selection of shareholders wasn’t a pure coincidence”.

“It was part of the strategy, of course,” he said. “Without being arrogant, we know what we are doing. Of course, we will leverage on our shareholders whenever it's possible to leverage on them. In which areas? This is something between us and our shareholders.” 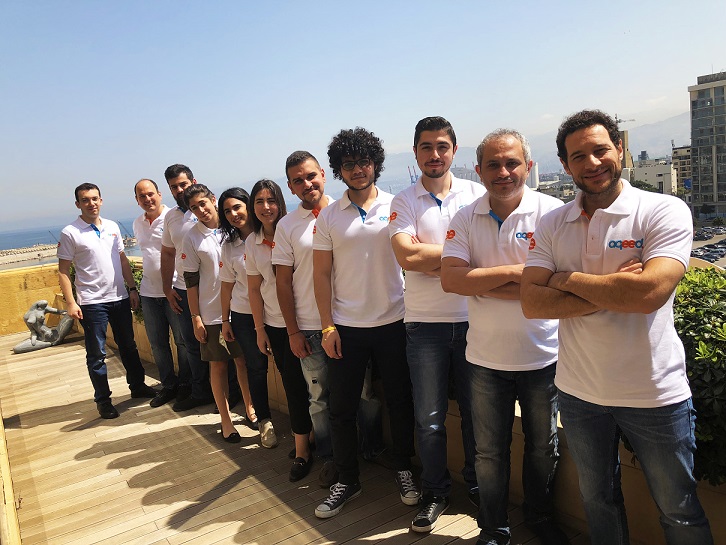 Team members of Dubai-based insurtech firm Aqeed, which launched with an $18 million Series A funding round in April (photo: Aqeed).

While the company’s shareholders offer unique strengths, it also has some hurdles to overcome.

For instance, although insurtech firms can create the algorithms required to find the most suitable policies offered in the United Arab Emirates, this business still needs to be routed through one of the country’s insurance brokers, or taken out directly with an insurance company. According to a UAE Insurance Authority report published last month, by the end of last year the country had 180 insurance brokers and 62 insurance companies in operation.

Radwan said Aqeed began by offering motor insurance quotes for two main reasons, First, because it is the biggest insurance market in the UAE – UAE Insurance Authority data shows more than 7.5 billion dirhams worth of motor and transportation premiums were written in 2017 - and secondly because motor insurance is also the most complex in terms of creating the necessary algorithms to find the best deals for customers.

Radwan said a range of new categories will be added from September and that eventually Aqeed will be “like a marketplace for distribution covering every possible insurance need”. The firm is set to offer travel and home insurance from next month, followed by health, life, bike, SME and fleet insurance.

“We expect by January 2019 to have online quotes for most of the products,” Radwan said in a follow-up email last week.

During the interview, Radwan stressed that Aqeed is an insurtech firm, not merely an online marketplace. It has developed an insurance wallet where customers can store and recall all their policy documents, whether taken out with Aqeed or a competitor. The company will also send reminders to customers as renewal dates approach, presenting them with alternative policy choices, explaining the pros and cons of each.

“Where we will be adding value is all these technological innovations that we are working on for the whole insurance value chain, which ranges from product development all the way to claims. We are covering the whole spectrum,” he said.

For instance, he said Aqeed would be able to analyse the different insurance policies a customer has and inform them if these policies duplicate coverage. Radwan said that in essence, his firm aims to use technology to simplify insurance.

“It shouldn't be something that you are annoyed doing,” he said. “We know it's mandatory, we know there is a point in your life where there is a time when you will need it. We want to make sure that if you're doing it from our end, you know what you are doing, and when you want it, it's at the click of a button.”

In terms of growth, Nader said Aqeed’s plan is to move into other insurance categories in order to target different customer bases and to also expand geographically.

“The GCC and the Middle East currently is our playground. After the UAE, hopefully we will have Saudi, and other markets such as Lebanon, such as Egypt and some other countries. Hopefully, the next market is Saudi Arabia.”

Whether this will require raising further funds or making acquisitions to expand into other markets, Nader was non-committal.

“Today, we have our funding. However, we have very ambitious plans. So far, we are not looking for any investors. If it's going to be an investor, it should be a strategic investor. But whether we do it in one year's time, in a year and a half … there's no decision on that yet,” said Nader.

“For now, we have enough money to serve what we are doing for the time being. Of course, other strategic moves will impact, for example, when we go to Saudi, how we go to Saudi.”

Radwan said part of the appeal of launching an insurtech business in the Middle East is that “the total addressable market here in the region is quite big”, but also immature.

For instance, he said most insurance buying is still done offline through brokers, whereas globally there has been a rapid move towards online purchases. The region also remains fairly immature in terms of the number of people taking out insurance.

“We know for a fact, for example, that insurance penetration in the region here is less than 2 percent, as compared in Europe where it ranges from 6-8 percent. And the density (number of policies per consumer) is low as well,” said Radwan.

In its most recent Quarterly Insurtech Briefing covering investments made in insurance technology firms globally, London-based risk consultancy Willis Towers Watson said a record $724 million worth of insurtech investments were made in the first quarter of 2018, up 155 percent year-on-year and 16 percent higher than the value of deals in the last three months of 2017.

Yet there are also signs that competition may be getting tougher, with the insurance sector becoming of increasing interest to technology giants.  Earlier this month, Reuters reported that Amazon had approached top insurers in Europe to gauge interest into a UK price comparison site, causing shares in existing insurance comparison sites like GoCompare and MoneySupermarket to fall. In China, companies such as Tencent and Alibaba already offer financial services products to users.

Therefore, if Aqeed is to gain a significant foothold in insurtech before the tech giants establish their own presence, the firm may need to maintain its prominent advertising campaign for a while longer.

How the UAE unlocks countless opportunities for entrepreneurs

Nothing to fear about artificial intelligence

Tech innovations in the UAE will only continue to rise

Nasdaq braced for beating as bond markets drive up costs