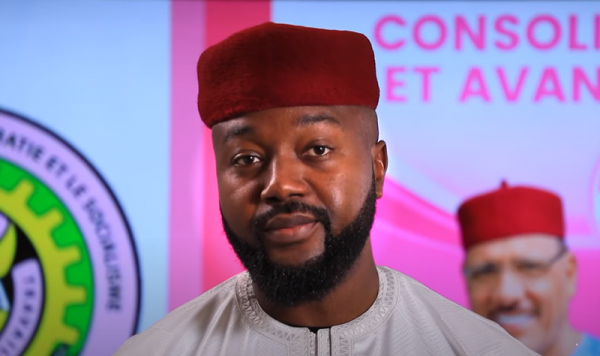 H.E. Mahamane Sani Mahamadou, Minister of Petroleum, Energy and Renewable Energies of the Republic of Niger, has confirmed his attendance and participation at African Energy Week (AEW) 2021, taking place in Cape Town on the 9th-12th of November 2021; With a focus on increasing domestic installed capacity, spurring oil and gas infrastructure developments, and establishing intra-African ties, H.E. Mahamadou is transforming Niger’s energy sector; H.E. Mahamadou joins a multitude of industry leaders and VIP’s at AEW 2021, all committed to keeping Africa-focused energy events and associated narratives in Africa.

The African Energy Chamber (AEC) is proud to announce the attendance of Niger’s Minister of Petroleum, Energy and Renewable Energies, H.E. Mahamane Sani Mahamadou, at African Energy Week (AEW) 2021. Representing one of Africa’s most promising energy sectors, H.E. Mahamadou’s will lead a country delegation to AEW 2021, driving the discussion around the role of oil and gas in Africa’s energy future. Backed by other VIP confirmations made in the last week, Niger’s participation reaffirms West Africa’s commitment to both AEW 2021 and Africa’s energy future.

H.E. Mahamadou has been instrumental in the development of Niger’s significant energy resources, expanding renewable energy projects and facilitating critical investment in the country’s promising oil and gas sector. With the goal of establishing Niger as a regional oil hub, and spurring job creation, knowledge sharing, and local content country wide, H.E. Mahamadou represents a key figure in Africa’s energy sector and is expected to be a valuable participant at AEW 2021.

Since his appointment in April 2021, H.E. Mahamadou has redirected a focus on the country’s burgeoning oil sector, prioritizing infrastructure developments such as the 2000km, US$4.5 billion crude oil pipeline linking the highly prospective Agadem Rift Basin in Niger to the Beninese Coast. With an expected capacity of 90,000 barrels per day upon completion in 2023, the pipeline is expected to increase domestic production five times over, establishing the country as a regional oil producer and global competitor.

The pipeline will provide a direct link between Niger’s abundant resources and international markets, increasing export opportunities and driving domestic production. Already, with two major oil producers active in the country, namely, the China National Petroleum Corporation (CNPC) – currently the main operator of the Niger-Benin pipeline - and Savannah Energy, Niger is driving frontier exploration and associated production. These producers have been instrumental in establishing Niger’s oil sector, leading drilling prospects which have led to significant discoveries. Coupled with an added focus on local content, Niger’s oil sector, under the leadership of H.E. Mahamadou, has driven job creation, increasing energy access and socioeconomic growth in the process.

“What Niger and the oil majors have managed to achieve in such as short space of time is impressive, demonstrating how political will, a transparent and productive regulatory framework, and an enabling investor environment can drive energy sector growth. AEW 2021 presents crucial opportunities, not only for Niger, but for oil majors such as CNPC and Savannah who are looking at expanding their footprint in African markets. AEW 2021 represents the platform whereby companies such as CNPC and Savannah can showcase their achievements and establish new partnerships to further develop and capitalize on Africa’s abundant resources,” stated NJ Ayuk, Executive Chairman, the AEC.

H.E. Mahamadou has played a pivotal role in the country’s renewable energy sector. By joining pan-African renewable energy programs such as Scaling Solar, signed in June 2021 in partnership with the World Bank Group, Niger aims to generate 30% of its power through sustainable sources by 2035. Recently, the International Finance Corporation and H.E. Mahamadou announced a 50MW solar power project which, when online, will equate to 20% of the country’s installed capacity.

“Niger is setting a trend for other African countries looking to diversify their energy mix and capitalize on renewable energy power generation solutions. Projects such as Scaling Solar, initiated under transformative renewable energy policies and national objectives, serve as catalyst for both Niger’s and Africa’s energy transition as a whole. AEW 2021 is a key platform to place renewable energy developments at the forefront of the African energy agenda, directing critical investment towards this promising sector and accelerating growth continent wide,” continues Ayuk.

Additionally, Niger’s natural gas potential – estimated at 18.6 billion cubic meters – remains significantly unexploited and thus presents a valuable investment opportunity for international stakeholders. With oil comprising a predominant share of its energy mix, the government is looking towards diversification and is seeking foreign capital to do so. According to the International Monetary Fund, Niger is amongst the top 15 fastest growing economic in the world, and backed by a favorable legal framework which remains attractive for private investment and project promotion, continues to present lucrative investment opportunities for international financiers.

Accordingly, AEW 2021 represents the most suitable platform in which emerging sectors such as Niger can secure critical capital. Already, the event has received support and endorsements by both regional and international financiers, and with networking-focus the top of the agenda, AEW 2021 represents the premier energy event whereby deals and decisions regarding Africa’s energy future will be made.

For more information about Africa’s premier energy event, please visit www.AEW2021.com or www.EnergyChamber.org and/or reach out directly to Amina Williams at amina.williams@energychamber.org.