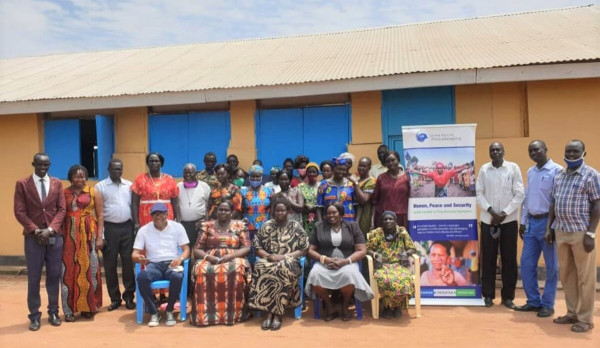 “Women should be empowered to challenge traditional gender roles and stereotypes,” said John Ozigbe, a Human Rights Officer from the United Nations Mission in South Sudan (UNMISS), based in Rumbek.

Mr. Ozigbe was speaking at a two-day workshop jointly hosted by the UNMISS Gender Affairs Unit, the state Ministry of Gender, Child and Social Welfare and the Community Empowerment for Progress Organization (CEPO).

The main aim of the event: To mobilize, sensitize and unite a wide spectrum of women leaders, community members, government representatives, academics, media partners and faith-based organizations and enhance their knowledge of key concepts related to gender equality in an environment that encouraged discussion and debate.

Some 30 participants attended the forum and engaged with facilitators on breaking gender myths.

“Having women in leadership roles is key for South Sudan,” continued Mr Ozigbe. “Send your girls to school, make sure they complete their education and can economically empower themselves. Women constitute 50 per cent of any society and their voices must be heard and included when it comes to shaping a bright and peaceful future for this country."

Adama Njie, Gender Affairs Officer with UNMISS in Rumbek agrees. “We believe that workshops such as this encourages participants, women as well as men, to reformulate their own perceptions about existing gender biases in society and they then trickle down this learning among their families, their neighbourhoods and their communities,” averred Ms. Njie. “This goes a long way in ensuring that women and young girls, who were among the most affected by conflict in South Sudan, become full and equal partners in decision-making and are represented in all forms of governance from the grassroots to the national level,” she added.

For her part, Sawat Mangok, Advisor on Human Rights, Lakes State, urged the participants to spread messages of gender parity and equality at their respective workplaces as well. “The only way women will be empowered to fulfil the critical role they have in building a sustainable peace across South Sudan is if all of us here spread the knowledge we have gained among our co-workers.”

Additionally, Ms. Mangok highlighted the importance of holding similar workshops across the state, especially in remote cattle camps, since this is vital information. “The Revitalized Peace Agreement signed by peace partners has a very important provision: Ensuring 35 per cent representation of women at all levels of decision-making and governance. This message must be spread far and wide,” she stated.

Furthermore, Ms. Mangok underscored the importance of consistent advocacy on education for girls. “If we don’t ensure our daughters receive the same education as sons, we risk them falling prey to forced or early marriages. This is detrimental for peace and development in the long term,” she added.

Participants were appreciative of the learning they acquired over the two-day period. “We are now clear on important aspects of gender equality and gender mainstreaming and we all will assume the responsibility of spreading these important messages and creating awareness among our communities,” averred Elijah Michael a representative of an inter-faith group.

Attendees also came up with a number of recommendations; six of these have been included as action points, the implementation of which will be followed up jointly by the UNMISS Gender Affairs Unit and the state Ministry of Gender, Child and Social Welfare.