VAT's impact on UAE inflation was "short-term and temporary" - Moody's

The $7.4bln of VAT collected in the UAE last year far exceeded expectations

A Moody's sign on the 7 World Trade Center tower is photographed in New York.

The introduction of value-added tax in the United Arab Emirates last year had only a "small and short-lived" impact on inflation, a new note from credit ratings agency Moody's has said.

The ratings agency said that revelation last month that revenue collected from the tax was much higher than expected was "credit positive" for the emirates with sovereign ratings. Government figures state that 27 billion dirhams ($7.4 billion) worth of revenue was collected - substantially ahead of the 12 billion dirhams originally projected for last year, or even the 2o billion in revenue forecast for this year. The higher rates of revenue collected was attributed to higher levels of compliance with the tax than expected.

Some 30 percent of the revenue collected is going to federal government coffers, with the remainder being spread between the individual emirates based on where they were generated, as opposed to a combination of non-oil GDP and population.

That is slightly less advantageous for the northern Emirates, Moody's said, as much of its population commuted to Dubai during the working day and spends money there. However, Sharjah's budget has benefited more from the VAT revenue than any other emirate, with VAT contributions making up 16 percent of total revenue. It is least important to Abu Dhabi, making up just 2 percent of its revenue.

Dubai earned the most amount from VAT last year, Moody's said, pocketing around 60 percent of the revenue distributed to the individual emirates, or 42 percent of total VAT revenue. 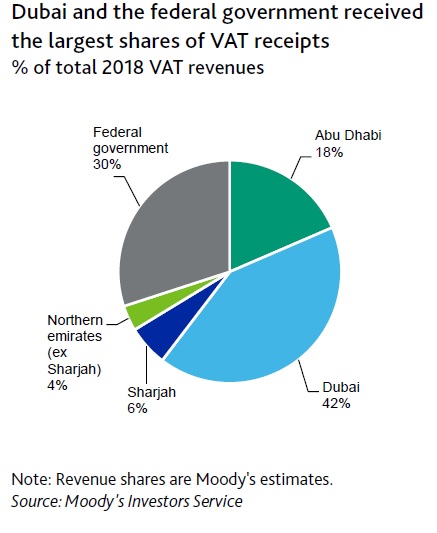 "Although the standing populations of Dubai and Abu Dhabi are fairly similar, Dubai benefits from much higher tourism spending and a higher daytime population," Moody's note said.

It added that the additional VAT earned "should help offset some of the losses to government revenues from the reduction in service fees that the government of Dubai recently implemented as part of its efforts to stimulate the economy".

Jean Paul Pigat, head of research at Lighthouse Research, said that the impact of VAT on inflation in the UAE "was always going to be short-lived, and in this case, is being outweighed by the downtrend in residential real estate prices as well as weaker corporate pricing power".

He said that it was not surprising that intial estimates for VAT collection were hard to preduct, but added that he "would expect to see these projections become more accurate in 2019 and beyond".

"Forecasting the initial impact of a policy like the introduction of VAT is difficult since you’re not simply trying to assess cyclical variables associated with the short run business cycle, but also broader structural issues that relate to compliance and institutional capacity," he said.

Bahrain Tourism: New five-year tourism strategy is on the way

Myanmar protesters back out on streets after bloodiest day since coup