Nine of the ten biggest listed banks in the United Arab Emirates reported declining returns at the end of last year as costs increased, according to Alvarez and Marsal.

The professional services firm’s UAE Banking Pulse report stated that the combined return on equity for the ten biggest banks dropped to 14.3 percent during the fourth quarter of 2017, down from 15.1 percent in the prior quarter.

Pietro Castronovo, a senior director at the firm, told journalists at a launch event for the report that declining returns could be attributed to three main factors - a higher cost-to-income, higher costs of risk and a decline in loan-to-deposit ratios.

Despite this, the firm’s managing director Asad Ahmed argued that banks should approach 2018 with a sense of "cautious optimism”. 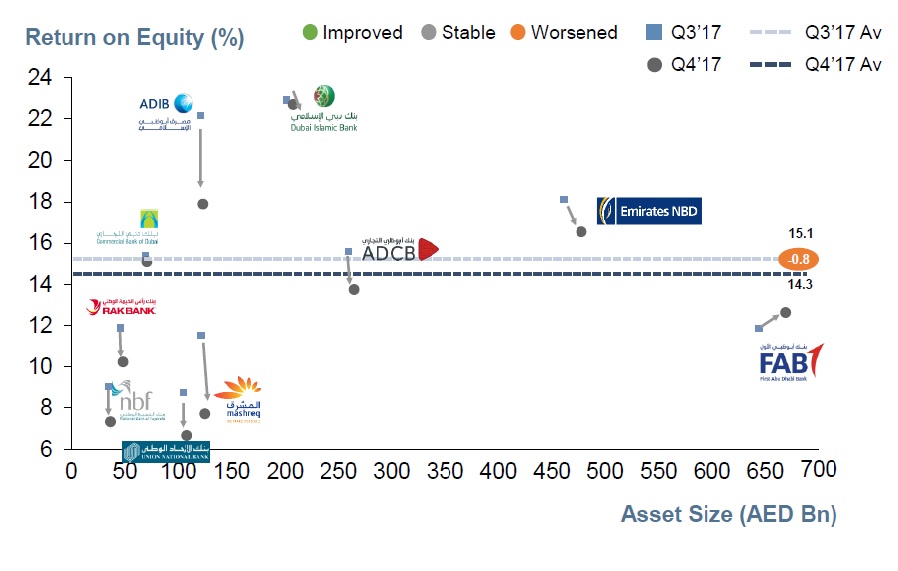 "On balance, I would say the fundamentals are good," Ahmed said, pointing out that operating income for the top ten banks grew by 3.46 percent in the fourth quarter, up from 1.92 percent in the previous quarter.

Banks' income growth was fuelled by gains from higher interest rates, which have not yet been passed through to deposit holders, with the cost of funds for the top ten banks remaining flat at 1.43 percent.

First Abu Dhabi Bank, which yesterday announced it had secured a commercial banking licence for Saudi Arabia, was the only one of the top ten banks that managed to boost returns on equity, as it managed to grow both loans and deposits.

Mashreq Bank, on the other hand, witnessed a decline in the size of its loan book, which Ahmed said was a result of greater provisioning against loans during the final quarter of the year.

Looking ahead, he said that banks' cost of funds is likely to increase during the current quarter as customers seek better returns on deposits. He also said that banks are likely to suffer a negative impact following the introduction of value-added tax (VAT), but argued that it was too early to judge the scale of its impact on profitability.

Castronovo said banks' margins were likely to take a hit because they would have to pay VAT on general and administrative costs, but that these could not be passed on to the consumer.

"It's not like a retail business where you pay the VAT but then you rebound on the other side to the customer.”

Loans, mortgages and credit cards are exempt from VAT, but fees and commissions charged for financial service are payable at the full 5 percent rate.