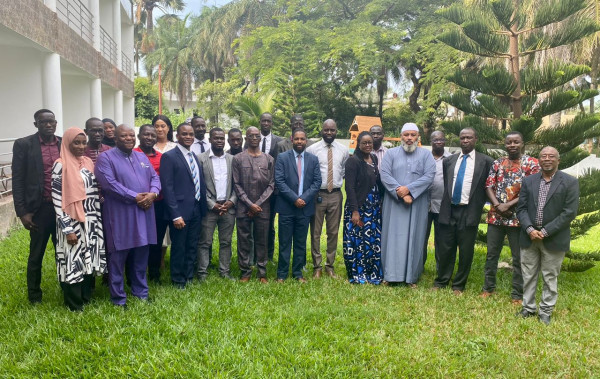 The consultation meeting, co-organised by the ECOWAS Commission and the Ministry of Communications and Digital Economy of The Gambia, was attended by officials from the Ministry of Communications and Digital Economy, the Public Utilities Regulatory Authority, Gambia Chamber of Commerce and Industry, Gambia Investment and Export Promotion Agency, Gambia Consumer and Competition Protection Commission, the Broadcasters Association of Gambia, Communications Service Providers in The Gambia as well as other Ministries and agencies within the Government.

Mr. Claude Kondor, Political Advisor, delivered the statement of the ECOWAS Commission on behalf of the Resident Representative of the ECOWAS Commission in The Gambia, Her Excellency Miatta French. In her statement, she highlighted how the digital economy sector is characterized by a fast pace of innovation and continuous improvement and enhancement of existing service offerings. She stated that due to the importance of these innovations and services to the economy, it is imperative that policymakers and regulators develop an approach to regulation which fosters the growth and development of these services under a fair and enabling environment whiles at the same time protecting the interests of consumers. It is for this reason, she said, that the ECOWAS Commission is undertaking the project for the elaboration of a new harmonised legal and regulatory framework to govern the development of digital economy sector in West Africa, which will address the emerging issues in the sector.

In her address to the meeting which was delivered by the Director for ICT, Mr. Amadou Nyang, the Permanent Secretary of the Ministry of Communications and Digital Economy of The Gambia, Mrs. Amie Njie, welcomed the initiative of the Commission to review the existing Community texts which were adopted over a decade ago to address specific thematic areas of ICT and modification of such texts to reflect current realities. She noted that the initiative was timely and in alignment with the Government of The Gambia’s own policy direction to give focus to the growth of the digital economy.

In line with the implementation of this policy, the prior Ministry of Information and Communications Infrastructure has been decoupled to establish the Ministry of Communications and Digital Economy which has been given the mandate to spearhead the digital transformation agenda of The Gambia. She also mentioned that like the review of the regional legal and regulatory framework being carried out presently, a review of the Information and Communications Act 2009, the law governing sector in The Gambia, is currently underway to address gaps and make it fit for purpose.

She commended the experts from the different stakeholder organisations for their positive response to the call for consultation on the draft regional text and charged them to make contributions reflecting the aspirations of The Gambia.

Over the three (3) days, the experts examined the draft Regulation and provided comments and feedback to be taken into consideration in its finalisation. The feedback from the national consultation exercises in Member States will be consolidated and incorporated in an updated draft which will be presented to the ECOWAS Ministers in charge of Telecommunications/ICT/Digitalisation for their approval, prior to submission to the relevant statutory organ of ECOWAS for its adoption.

74% of UAE employees are looking for new jobs as inflation bites, survey finds

Jafza's Polymers and Petrochemical trade worth over $13bln in 2021