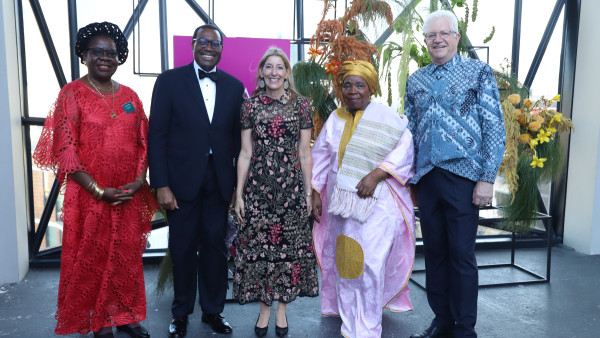 By 2050, the number of people living in African cities is expected to double from about 600 million to 1.2 billion, representing the most rapid rate of urbanisation in the world. This poses significant development challenges, which will require innovative, African-led solutions.

In rousing remarks to the mayors of 15 African cities gathered for the inaugural forum of the African Mayoral Leadership Initiative (AMALI) (https://bit.ly/3Rkpqb7), African Development Bank Group President, Dr Akinwumi A. Adesina, provided highlights of how city leaders—supported by national governments—can rapidly transform urban development on the continent, in sustainable ways.

AMALI is a partnership between the African Centre for Cities (ACC) at the University of Cape Town and Big Win Philanthropy.

According to Dr Adesina: “There is need to provide greater autonomy and fiscal responsibility to cities and towns and for national governments to allow them to raise financing to meet the huge needs of development. Instead of simply depending more on transfers from national governments, cities and towns should build their institutional capacity to raise their own financing.”

Dr Adesina noted the critical role that initiatives like AMALI can play in sharing best practices across cities and helping leaders overcome the challenges that urbanisation poses. He also highlighted the African Development Bank’s commitment to working with city leaders to transform their cities, noting that, on average, the bank’s board approves more than $2 billion per year for projects and programs that have a direct positive impact on urban areas across Africa.

The Bank’s support includes the establishment of an Urban and Municipal Development Fund to provide technical assistance and capacity building for integrated urban planning, governance, project preparation, and broader urban management, including municipal fiscal management. The Fund provides support in more than 15 cities—to help improve the lives of millions of urban residents.

In a clear call to action to Africa’s city leaders, Dr Adesina said,“The Africa we want must be one where our cities are well planned to become drivers of greater economic growth and prosperity for Africa. This cannot happen by chance. The future is not created by a roll of the dice. So let us act to transform Africa’s cities,” Dr Adesina said.

Speaking at the event, Alan Winde, Premier of the Western Cape, highlighted strategic ways in which regional and national governments can support mayors to transform their cities—creating impact that extends well beyond the city limits.

“I believe in decentralisation. I believe, where possible, it gives local authorities the power to dream big, to have visions, and to move forward into the future,” he said. According to Premier Winde, decentralisation “lets us, at national levels and provincial levels, empower and enable local authorities and cities, because it's cities that are going to be growing out of proportion over the next 50 and 100 years.”

The event also included remarks from Prof. Edgar Pieterse, Founding Director of the African Centre for Cities and Co-Chair of AMALI, Prof. Mamokgethi Phakeng, Vice-Chancellor of the University of Cape Town, and Jamie Cooper, Founder and President of Big Win Philanthropy and Co-Chair of AMALI.

Notes to editors:
Photo and video:
A recording of Dr Adesina’s remarks and a selection of photos can be found here (https://bit.ly/3H37tZP).

About AMALI:
The African Mayoral Leadership Initiative (AMALI) seeks to catalyse the transformation of cities in Africa by providing tailored support to city leaders through two key platforms. The AMALI City Leadership Programme offers a year-long programme that supports mayors in honing the visions for their cities. The participating mayors gain clarity on the teams and tools required to successfully implement their plans and secure support from their constituents and key stakeholders. The AMALI Urban Governance Research Lab provides mayors and other policymakers with the research support and data analytics they need to transform African cities.

About African Centre for Cities:
www.AfricanCentreforCities.net
The African Centre for Cities (ACC) is an interdisciplinary hub at the University of Cape Town with a mandate to conduct meaningful research on how to understand, recast, and address pressing urban crises. ACC is recognised globally as a leading institution for urban research in Africa with a decade-long track record of promoting a Southern perspective on the future of cities.