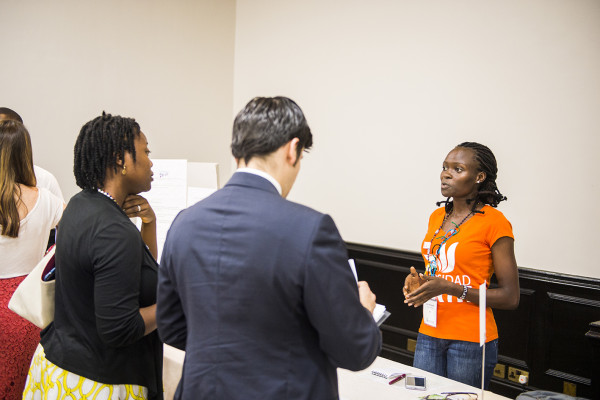 According to a 2019 report by McKinsey (https://mck.co/2XHsEcv), 60 percent of Africans are engaged in subsistence farming. It makes up 23 percent of the continent’s GDP and is one of the most critical sectors for development. Feed Africa (https://bit.ly/3Adv8Du), a report from the African Development Bank Group, states, “Africa has 65 percent of the world’s remaining uncultivated arable land, an abundance of fresh water, and about 300 days of sunshine each year.” Africa’s potential to meet not only its own food needs but those of the rest of the world is abundantly clear.

The Mastercard Foundation Scholars Program fosters the development of Africa’s future leaders in diverse sectors, including agriculture. Scholars are committed to giving back to their communities using their skills, knowledge, and networks to address challenges and drive innovation.

The Scholars Program includes initiatives such as the Scholars Entrepreneurship Fund (SEF), which was launched in 2018, and the Social Venture Challenge (SVC), a partnership with the Resolution Projects entering its seventh year. Both give Scholars and alumni an opportunity to pitch their ideas and bring them to life. Since 2016, more than 140 Scholars have been awarded Resolution Fellowships and their ventures are spread across 19 countries. Thirty-three percent of the Scholars surveyed regarding their ventures reported running ag-related businesses.

In 2016, Mastercard Foundation Scholars Lucia Lebasha and John Awiel, both Kenyans, created an award-winning social entrepreneurship project called Save the Pastoralist Initiative (STPI), motivated by their childhood experiences of hunger and severe drought in Turkana, Kenya. This was achieved through their knowledge of sustainable agricultural practices gained through their studies at EARTH University.

The people of Turkana predominately live a nomadic, pastoral way of life in which their animals are the primary source of food and wealth. Turkana is also one of the driest districts in the country; rainfall is minimal and unpredictable. The many years of drought have created an ongoing struggle with hunger and malnutrition and a continual threat to their cattle and pastoral land.

STPI began as an educational communications effort, writing and posting agricultural articles online in local newsletters and on their blog and Facebook page.

Taking these efforts one step further, Lucia and John established a demonstration farm in Lodwar, the region’s economic centre, where they educated traditional pastoralists and young people on the benefits of sustainable agricultural practices with a focus on subsistence farming, conservation, technology, and job creation. While John recently joined the admissions team at EARTH University, responsible for recruiting Scholars with a passion for agriculture, Lucia continues to run the project working with local communities and organizations in Turkana South Sub-County, Kangirega. The project currently supports 43 farmers (24 women and 19 men), providing training on agronomic farm inputs and linkages to markets for their products and financial institutions.

Project 7840  was developed by Scholars Ernest Chakwera and Nancy Machera in 2016 to alleviate the effects of droughts on their village of Khwelewere in the Ntchisi district of central Malawi. The project helps Malawians access water for consumption and crops, using local resources and promoting sustainable water use for the benefit of the community. It also provides local farmers with support and education about sustainable farming techniques, local market opportunities, and financing options.

Through Universidad EARTH Graduates Association (UNEGA) Integrated Farm, Scholars Alex Kyeyune, Fatimah Birungi, and Paul Mukuye have created innovative ways to boost farming practices and techniques, which have significantly improved the health and well-being of many rural communities. In Uganda, smallholder farmers face several challenges such as scarcity of land, ashy soil, and drought — all of which affect productivity.

In 2017, the UNEGA team introduced sustainable farming techniques such as micro-gardening, including vertical, pyramid, and bio-intensive farming, through their demonstration farm in Kabubbu Village, Uganda. These techniques have helped farmers double and triple their yields without increasing the land required for cultivation. Balancing it with sustainability efforts, the eco-friendly micro-gardens use recyclable materials such as plastics, old tires, and bags, and seventy-five percent of the manure used is organic. In the last three years, the team has trained 54 households, which in turn have shared what they have learned with more than 100 households. Of the 154 households, 60 have established small gardens at their residences. UNEGA has also worked with ten schools to educate school heads on the value of school gardens, and five have established gardens of their own. Through their efforts, 16 women-led businesses have had access to a continuous supply of vegetables to sell.

In 2020, Esnath Divasoni from East Harare, Zimbabwe, developed innovative and indigenous farming techniques that are eco-friendly and mitigate malnutrition and food insecurity. She ventured into an unfamiliar terrain - cricket farming. Though plucking worms from trees and collecting insects in plastic bags was a common sight for her growing up, she felt it could be more plentiful and regular than just being seasonal. https://bit.ly/3QLLyd2

A Mastercard Foundation Scholar alum from CAMFED (Campaign for Female Education), which accorded her secondary education, after which she proceeded to EARTH University, Costa Rica, Esnath is now one of two core trainers in the CAMFED Agriculture Guide program. They have trained 320 Agriculture Guides across several districts who are now cascading their knowledge to other women across the country. Her edible-insect production unit is an eco-friendly five-by-seven-meter room with rows of large blue and greenwashing tubs stacked on two shelves on her parent’s farm in Marondera.

The Mastercard Foundation Scholars Program, through initiatives like SVC and SEF and university partnerships like the one with EARTH University, which focuses on entrepreneurship and transformative leadership in agriculture, provides Scholars with opportunities to address local challenges, develop entrepreneurship skills, and leverage agriculture to impact their communities positively. As they do so, they create opportunities that drive learning and leadership for themselves and their peers.

Distributed by APO Group on behalf of Yekeen Akinwale.

Agricultural output shrinks by 0.1% in 2022: Phillipines